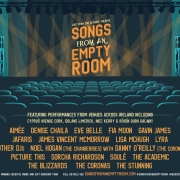 Minding Creative Minds is delighted to have been chosen alongside the Association of Irish Stage Technicians (AIST.ie) as one of the industry initiatives who will be supported through the Songs From An Empty Room which appeared on RTE2 on Saturday July 25th.  Songs from an Empty Room was programmed by EPIC Working Group

Twenty (20) Irish bands and artists reunited with their production crew doing what they do best in a unique night of performances from The Olympia Theatre Dublin, Cyprus Avenue in Cork, Dolan’s Pub Limerick, INEC Arena at Gleneagle Hotel in Killarney and Róisín Dubh Pub Galway

The event was simulcast on RTE 2 Television, RTE 2FM and the RTE Player. #SongsFromAnEmptyRoom #WeAreTheSupportAct and funds raised by supporters donating €4 by texting  SONGS to 50300 together with making donations to a still active GoFundMe page.
https://www.gofundme.com/f/songsfromanemptyroom

Minding Creative Minds would like to thank everyone who was involved in this fantastic live event especially the artists and crew and is extremely thankful to the public who donated.

Special thanks to the following for your very kind donations

U2
The Blizzards
Eoghan McDermott