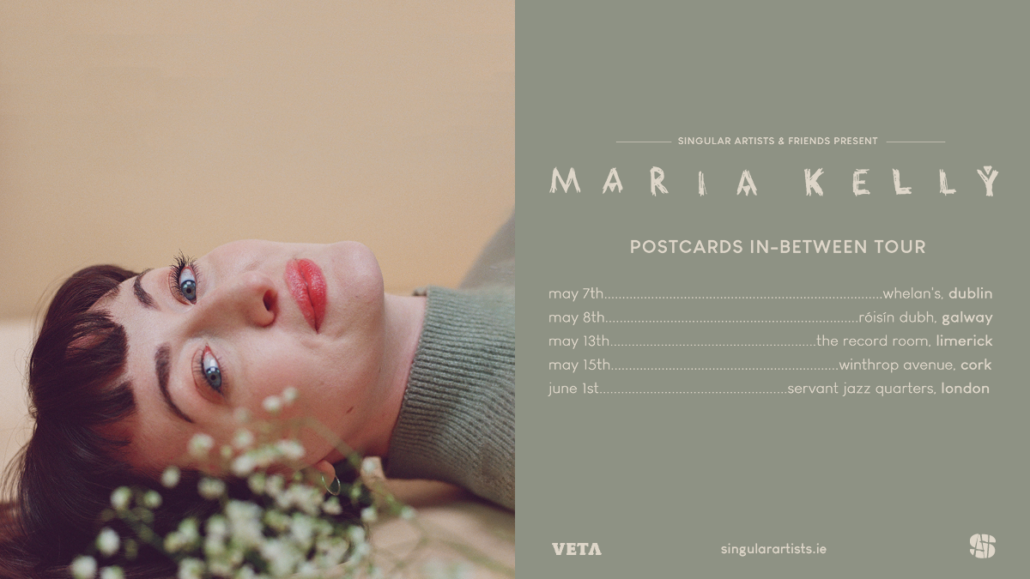 Irish alt-folk star Maria Kelly today announces the details of Postcards In-between: an ambitious project that comprises a tour of Ireland and the UK; a pop-up exhibition and event that brings Irish creatives together in an effort to cultivate self-compassion and examine mental health supports; and new versions of a selection of the songs from her debut album, The Sum of the In-between, which was released last October.

Maria Kelly will play tour dates in Ireland and one in the UK this May and June, in a tour presented by Singular Artists & Friends. Tickets for all shows are on sale now. Dates as follows:

The Postcards In-between project initially started with Maria asking her fellow Irish songwriters to pen a ‘note to self’ letter to a version of themselves that they thought might need a helping hand. The letters became 12 postcards – each one linking to a track on the original The Sum of the In-between album.

Designed by Irish-French illustrators Pipe & Pallet (Nathanaël Roman) and Cécilia Noiraud, these postcards will be exhibited in various forms at a free pop-up exhibition taking place at Universal Space, Dublin on the first two days of the May bank holiday weekend – Saturday 30th April and Sunday 1st May.

On the Saturday evening, at 7pm, there will be a ticketed event with a panel discussion and live music performances.

The exhibition and event are being run in association with Minding Creative Minds, Ireland’s first 24/7 (32 county and our Irish overseas) wellbeing support programme for the entire Irish creative sector.  Minding Creative Minds‘ counselling services (in association with Spectrum Life) include: *a 24/7 Dedicated Phone Line; Short-term intervention, telephone Counselling, secure video counselling and comprehensive web portal and app enabling live chat function with a counsellor. Minding Creative Minds focuses on the wellbeing of the entire person, so our programme also includes access to a number of additional services, helping users with various practical issues also.  See **additional details on our key supports and all our contact details in the editors notes section later in this document.

Dave Reid founder, Minding Creative Minds says: “Our focus at Minding Creative Minds is supporting the entire individual. We ask people in our creative community not to wait until they are in a crisis to contact us; if something is troubling you, regardless of how small you deem it to be, let us help you. This in itself is one of the kindest acts of self-compassion you can show yourself; the theme Maria has chosen for this beautiful and thought-provoking exhibition and event. We applaud Maria for this initiative and are very pleased to display our support by partnering with her for The Postcards In Between Exhibition and Event.”

In addition to the postcards to be exhibited, Maria has also teamed up with a number of the artists mentioned to record a series of reworkings, remixes and alternative versions of a selection of the songs from The Sum of the In-between.

Details of the singles to be released will be announced over the coming weeks and months, but we can reveal that the first of these will be a collaboration between Maria Kelly and Paul Noonan for a stunning version of the album’s title track ‘The Sum of the In-between’,  which will be released on Wednesday 30th March on Maria’s label, Veta Music.

Of this project, Maria Kelly says: “‘Postcards In-between’ aims to bridge the gap between who we were, who we are, and who we will be. It’s a project about self-compassion; acknowledging the part of ourselves that is always changing, growing and learning. The part that is always, at some level, trying their best.

“By collecting different perspectives this way I hope that anyone reading the postcard or visiting the exhibition might be able to identify with them, finding some comfort in the fact that somebody else made it out the other side – a way of seeing yourself, by meeting somebody else exactly where they are.”